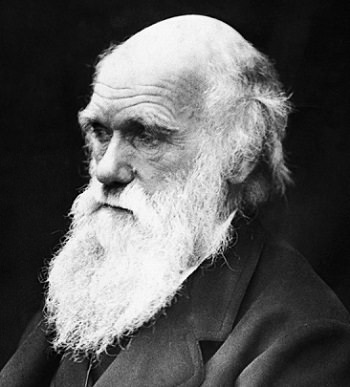 Charles Darwin was the preeminent naturalist of the nineteenth century. His theories on evolution by natural selection created the basis for all modern studies on evolution.

He was born Charles Robert Darwin on February 12, 1809, in Shrewsbury, Shropshire England. Charles Darwin was the second son of Susannah Wedgwood and Robert Waring Darwin. The couple also had three sisters older than Charles. Robert Darwin was a doctor and Susannah the daughter of Josiah Wedgwood, an early Unitarian and pottery industrialist. Robert Darwin's father, Charles' grandfather, Erasmus Darwin, was a doctor and poet who authored Zoonomia; or the Laws of Organic Life, in 1794.

When Charles Darwin was eight his mother died and his three older sisters became his primary caregivers. He displayed a keen interest in medicine, science, and psychology and was inspired by his father's observation of medicine in everyday life. He did not enjoy his very traditional schooling however, where he was taught the Classics and discouraged from studying science and chemistry. Because of his interest in chemistry and sciences Darwin was ridiculed in school by students and the headmaster and given the nickname of "Gas."

His distinguished father, possibly falsely convinced his son was not committed to his studies by accounts of the headmaster, enrolled Darwin at Edinburgh University to study medicine in 1825. At the time Edinburgh offered the most forward-thinking education in science of any university in Britain. Among his studies were extensive chemistry lessons and studies of natural science.

Perhaps most impactful to Darwin's education at Edinburgh were the freethinking lecturers the university attracted. They were often banned from speaking at traditional universities like Oxford and Cambridge. While those universities refused to separate themselves from science grounded in Anglicanism, these dissenters challenged the religious stronghold over science in areas like anatomy and mental processes of both humans and animals. Charles was encouraged to understand primitive creatures like invertebrates which inspired him to contemplate the origin of all species.

Darwin's father observed that though his son was studying medicine, he could not stomach surgery and was uninterested in human anatomy. Fearing that his son would become aimless without being able to dedicate himself to medicine, in 1828 he transferred Darwin to Christ's College in Cambridge. This education was in stark contrast to Edinburgh and Darwin was treated as a young Anglican gentleman. He engaged in common social activities like drinking and shooting. He studied botany under Reverend John Stevens Henslow and went on his first expedition to Wales with Reverend Adam Sedgwick in 1831.

Inspired by accounts of expeditions in South America, Darwin found a place for himself as a naturalist on board the HMS Beagle. The ship was commanded by Robert Fitzroy, a young aristocrat who did not want to sail by himself but planned to do a coastal land survey of Patagonia and also return three "savages" from Tierra del Fuego to their homeland. Darwin brought his books, weapons, and a newly acquired skill set for preservation of animal carcasses.

The journey was long and arduous, but Darwin as a self-financed naturalist was able to leave the ship for long periods of time to attend to his other interests. He was fascinated by the vastness of the ocean and its creatures and observed the geologic features of the coast line. Darwin's time onboard and off was very solitary and he was disgusted by the slavery and genocide by battle he observed during his time in South America. He often left heavily populated areas to explore the Rio de Janeiro rainforests and their insect inhabitants.

Another labor of love Darwin pursued during this expedition was a large-scale excavation of multiple different extinct mammal bones, which began his contemplation of why these animals did in fact go extinct. His observations on geological features led to his assumption that the land had risen above the sea in many areas and prompted thought the vast time span the earth and its creatures had witnessed. When Fitzroy and Darwin returned he had completed a 770 page diary detailing his notes and sketches, but had more questions about evolution that he had left with.

The diary had been published and led to a grant obtained from the Treasury that allowed him to enlist experts on zoology for a series of collaborative papers from 1838-1843 that described his animal specimens, published as Zoology of the Voyage of the H.M.S. Beagle. Darwin became well known and sought to reckon his religious beliefs with what he had observed from both animal and human societal norms like slavery.

Darwin was influenced by Thomas Malmuth's Essay on the Principle of Population. The economic paper from 1838 led to a series of poor laws that sought to reduce overpopulation. Darwin applied some of these principles for humanity to what he had observed in the wild and created his own mechanism called "natural selection." He created a 35 page sketch of his theory but did not immediately try to publish it, partially because he had seen from his wife, Emma Wedgwood, a kind of horror when he had tried to convey his theories on evolution.

Darwin moved himself and his family to the village of Downe which felt very isolated from society. He continued his study and published works on coral reefs, botany, insects and geology, but largely tried to stay out of the public eye and did not confess his theory of evolution to many, fearing it to be akin to confessing a sin. Considering the persecution of Atheists by Anglican laws, this was not a far-fetched fear, though Darwin still maintained a belief in God as the almighty creator.

Darwin solidified his role as a prominent resource on biological principles after a groundbreaking study on barnacles that revealed hermaphroditic traits and further sparked his interest in the difference between female and male form. As time and society progressed the stage was set for more acceptance of Darwin's theories and Darwin lost much belief in God after his daughter's death. Series of further studies on artificial breeding and production were rounding out his theory and providing a strategy on how to present it. He felt greater haste to complete a publication when confronted with Alfred Russel Wallace's letter and sketches that seemed to indicate similar theories to his own.

Darwin published On the Origin of Species by Means of Natural Selection in 1859 with tremendous personal anxiety as to how it would be received. The reception was not as disastrous as he anticipated and Cambridge folk were beginning to accept scientific realities while dissenters greatly embraced his theories. Three reviews of his studies were published and in 1864, supported by Alfred Huxley, Darwin received the Copley Medal from the Royal Society.

The 1860s found Darwin in ever-declining health and his wife Emma caring for him and their remaining children. He published six editions of On the Origin of Species during this time period and attempted to defend and move around criticisms by tying in his knowledge of botany and bees to prove natural selection.

As natural selection became widely accepted, Darwin plowed forward into an analysis of morality and traits of the human race entitled The Descent of Man, and Selection in Relation to Sex in 1871. His work on facial expression, The Expression of the Emotions in Man and Animals, from 1872, sought to disprove the Divine belief in facial structure.

By the end of his life, Darwin was hailed for his scientific contributions and shielded from intense criticism by friends like Huxley. By the 1880s he was in very poor heath and he died on April 19th, 1882. His burial in the town of Downe was perceived as too low-brow, and with Huxley's persuasion Darwin's body was buried at Westminster Abbey.